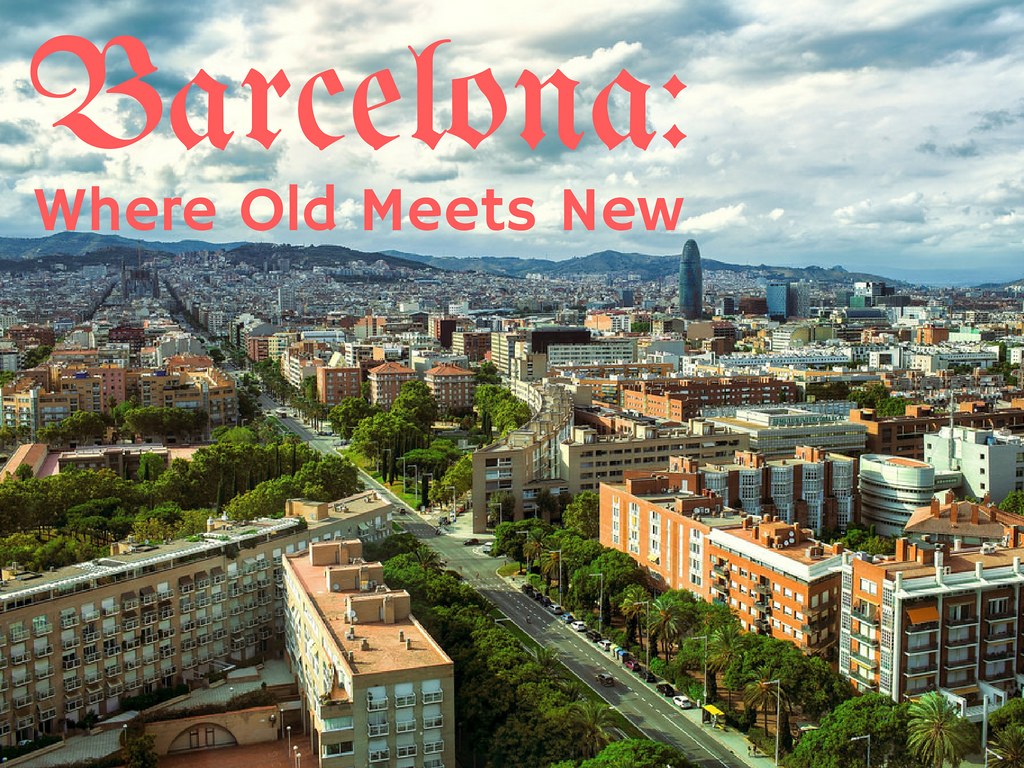 One of the most important destinations for us to reach during this Eurotrip was Barcelona as Fabian’s brother, Bastien, and his girlfriend, Katya had just moved there…again.  Luckily, it wasn’t their first time (it’s actually where they met) so they were our expert tour guides around the city. 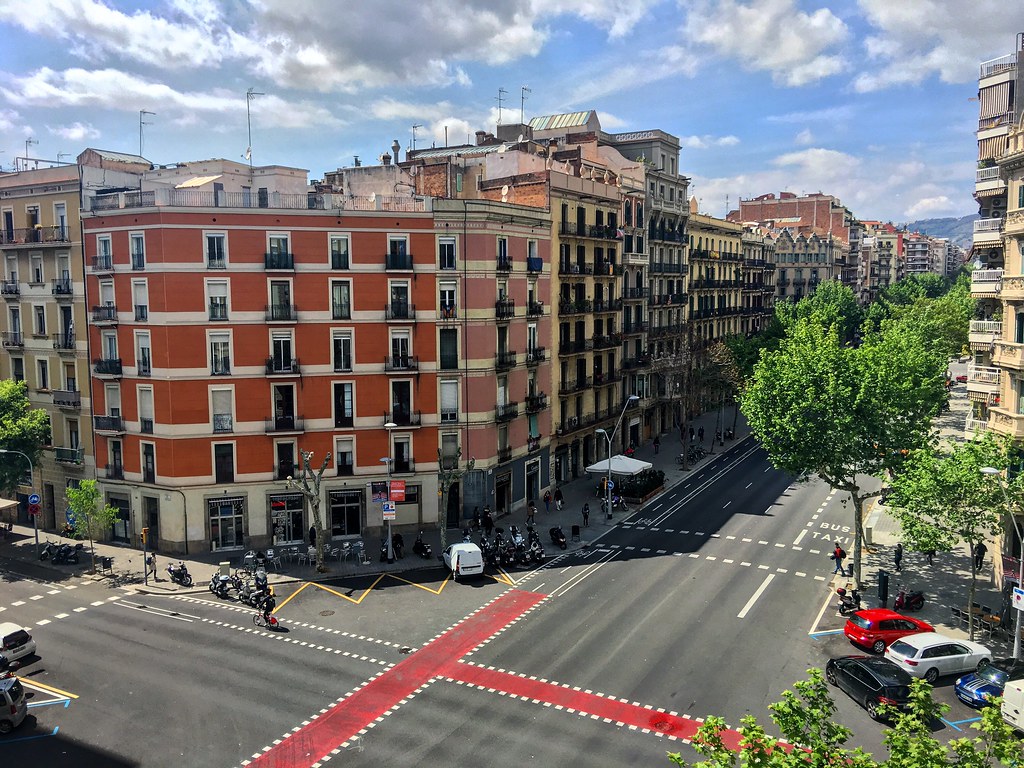 Their place was really cool and right in the middle of the action, each balcony of the apartment had a great view (as seen above).  We could always hear things happening below us as we laid in bed at night, whether it was singing, chanting for futball… and once, even a hoard of bicyclists blasting music on a boombox. 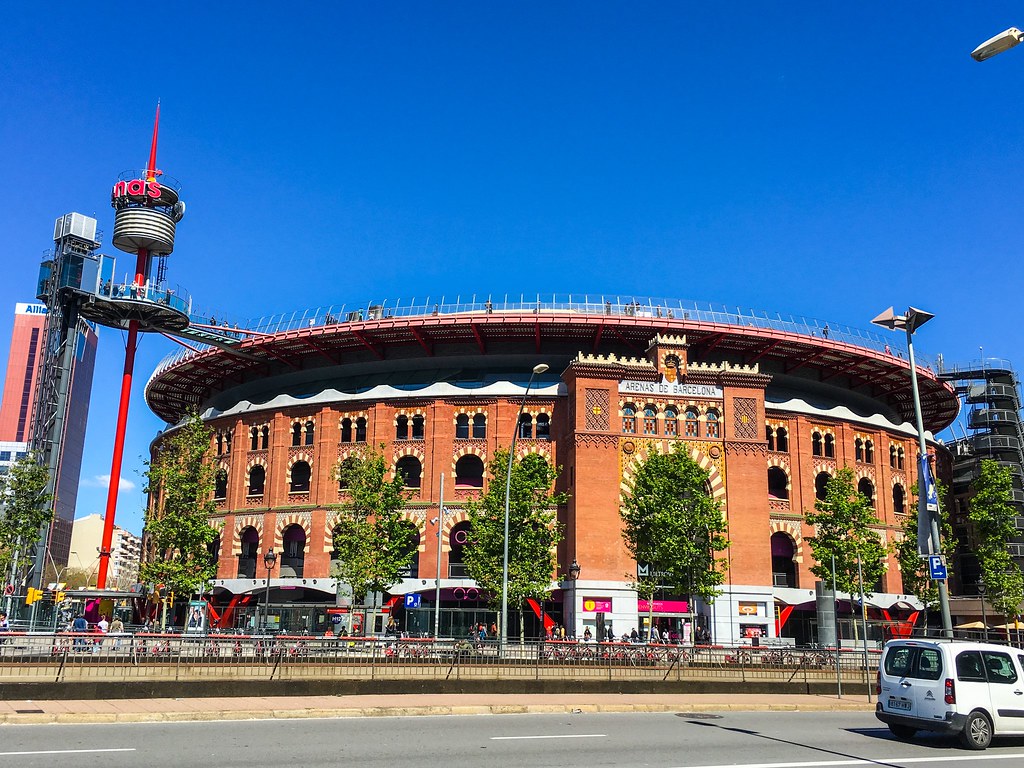 This city is full of history, from Las Arenas (a stadium once used for bull fighting converted into a mall) to the Medieval quarters, my favorite area. 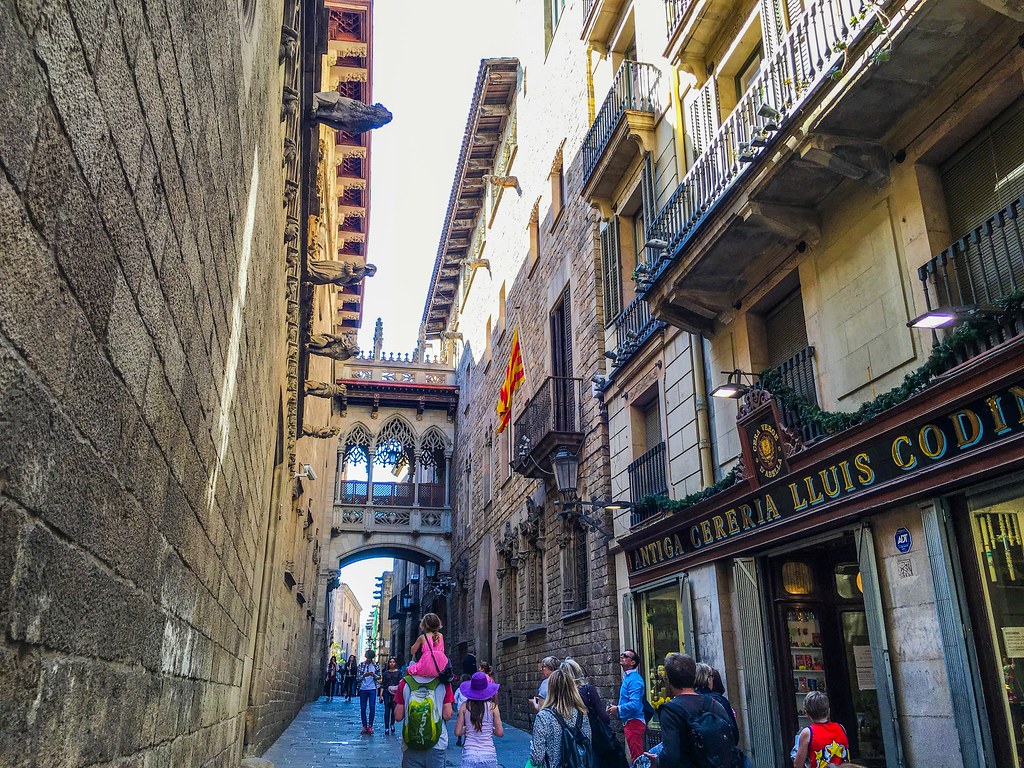 I loved the feeling of walking through narrow allies made of cobblestone and Gothic style churches, with street performers on violins and Spanish guitars around multiple corners- making the streets come to life. 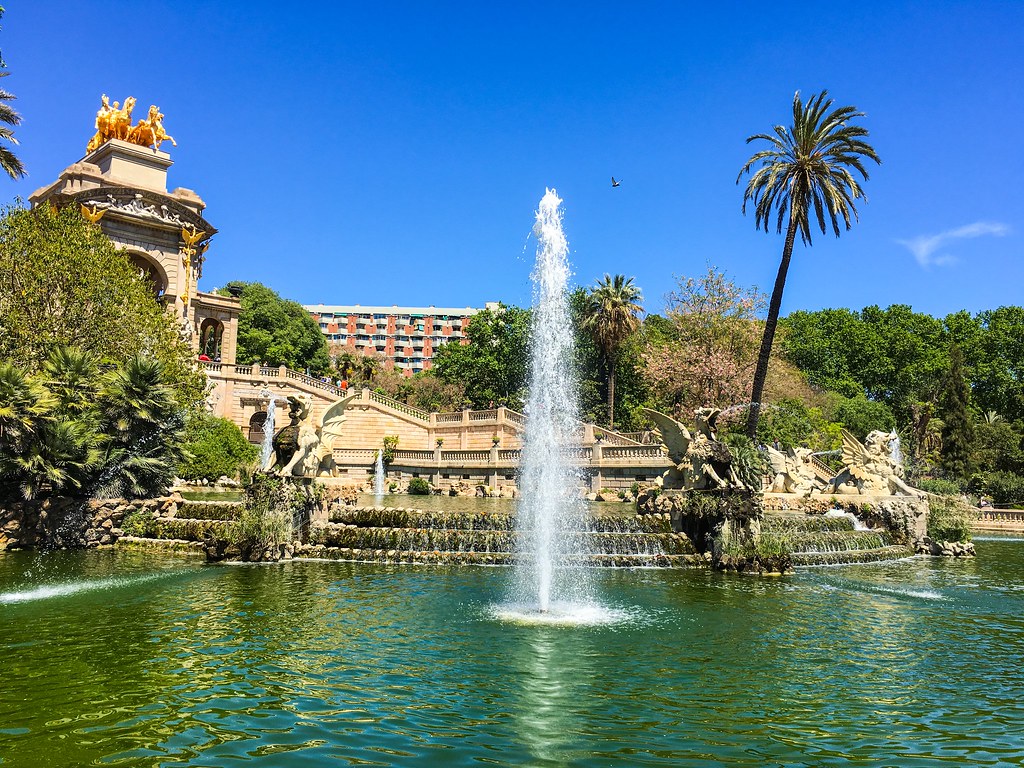 Another favorite place of mine was the Parc de la Ciutadella (or the citadel of Catalonia during the War of Spanish Succession).  Within the citadel today, you can find a zoo and a museum of natural science, but I say go just to get a look at the impressive cascade (shown above). 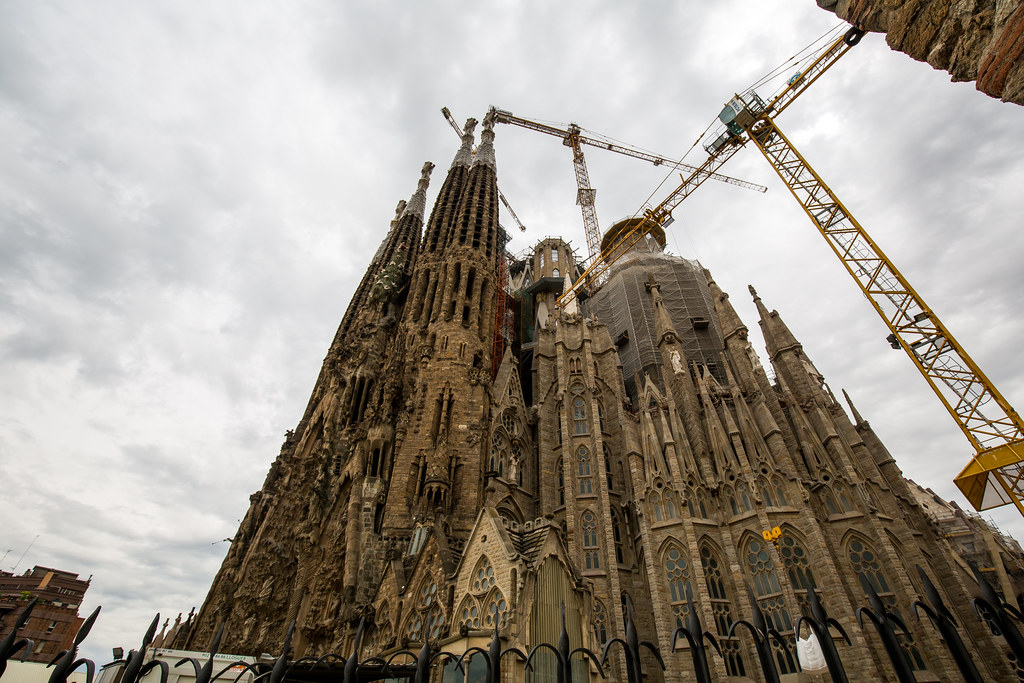 Speaking of history and all things impressive no trip to Barcelona is complete without a look at the Sagrada Familia, Antoni Gaudi’s cathedral over 100 years in the making.  This basilica, to me, is a symbol of the entire city- the perfect example of “old meets new.”  You see, the construction of this church began in 1882 and is still being worked on to this day!  One side of the construction site feels very Gothic, but with Gaudi’s personal touch, which almost makes it look like the building is melting.  The other half is completely contemporary with sharp lines and angles practically a paradox of the original design. 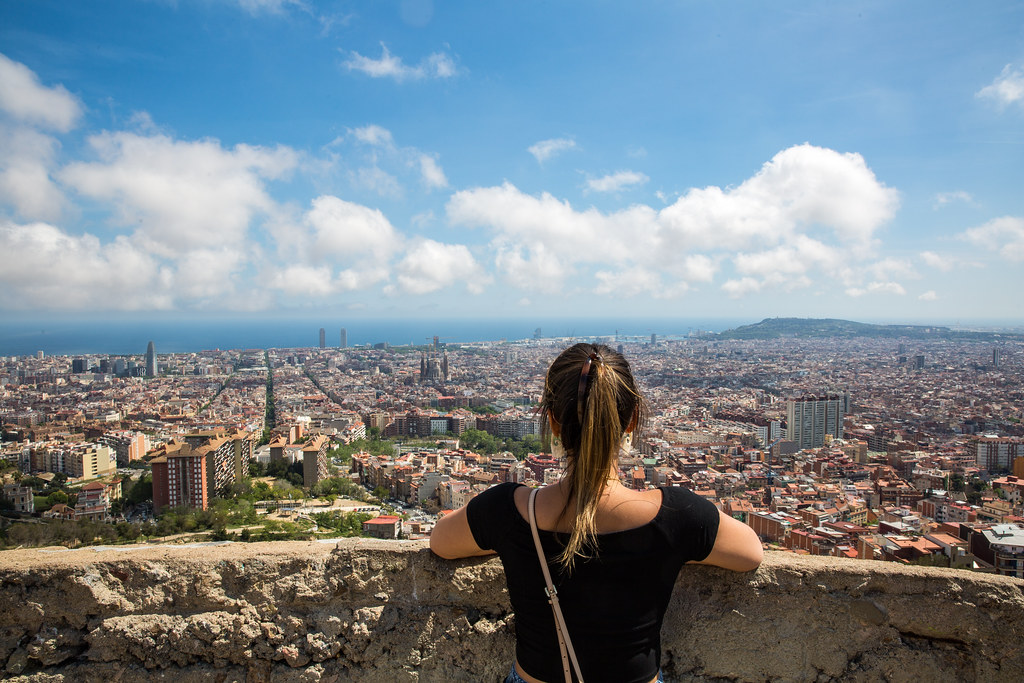 Another “must see” of Barcelona would have to be the city from above.  At the Bunkers del Carmel you’ll get a bird’s eye view of the perfect grid that makes up Barcelona. 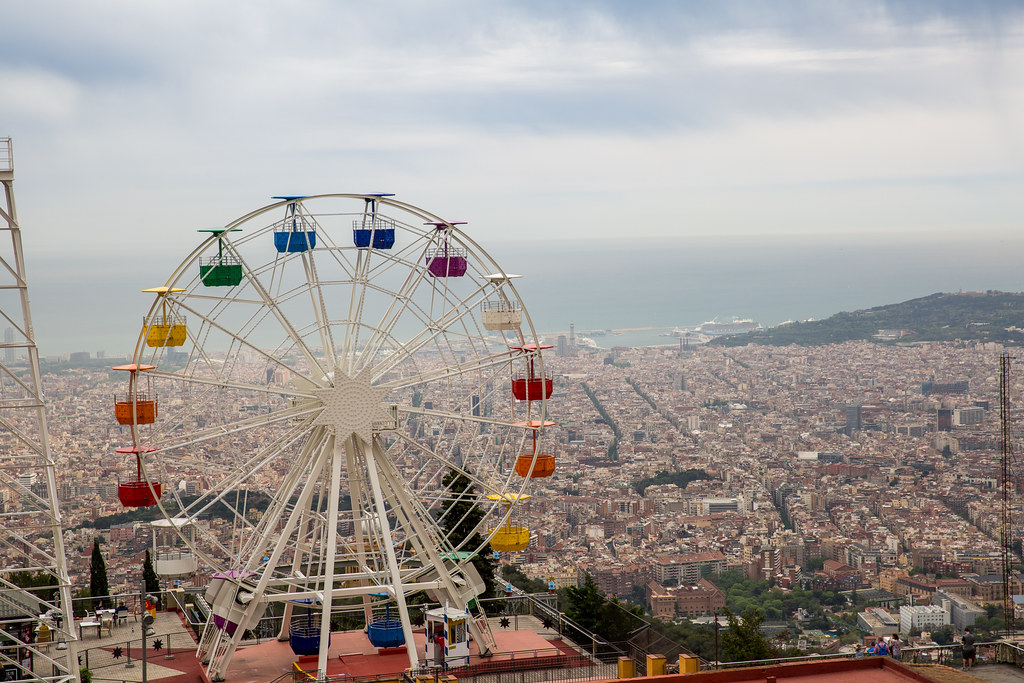 For a more unique view, take a ride on the ferris wheel at Tibidabo, an amusement park and church at the top of one of the mountains surrounding the city. 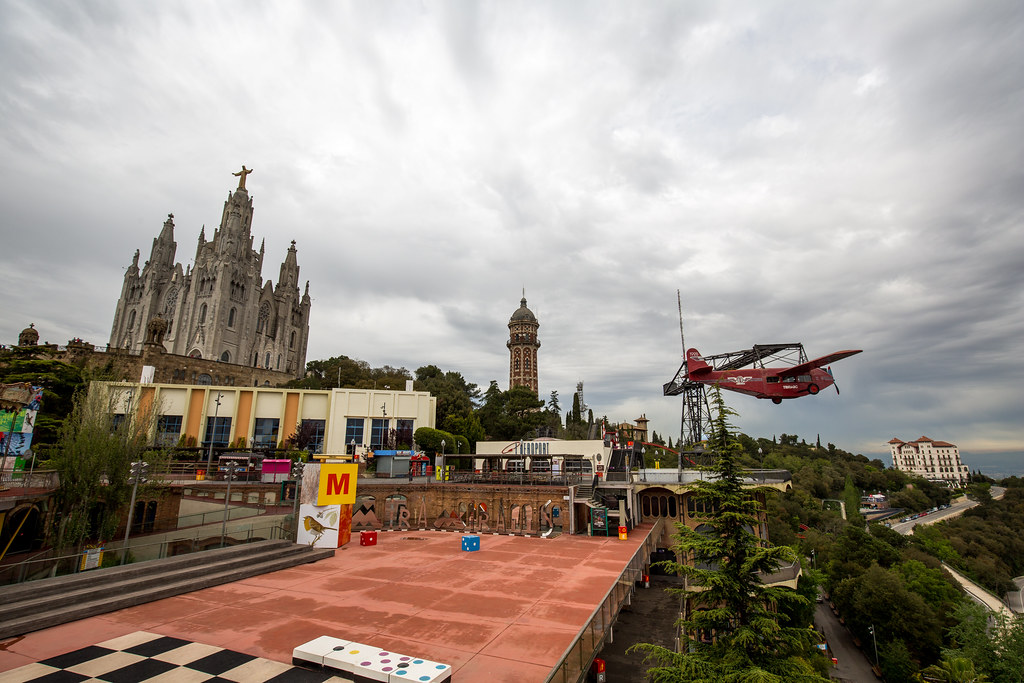 Other ride options include this “red aeroplane”, which has been flying around the park since 1928! 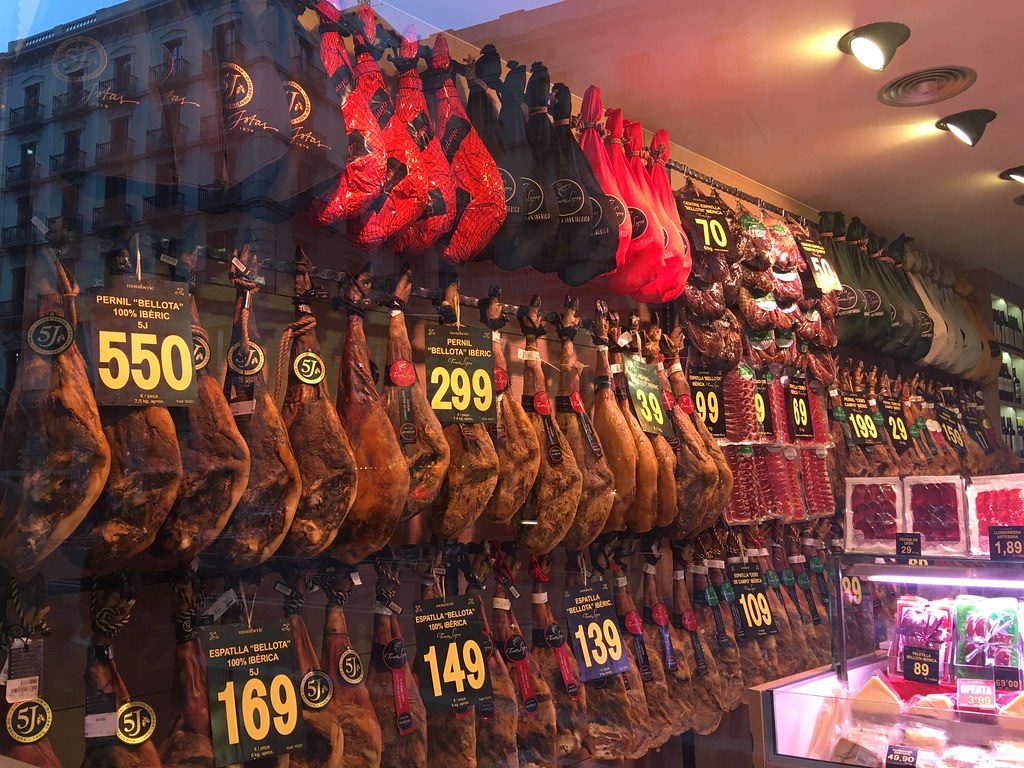 Another factor that differentiates Spain from the rest of Europe would have to be the food.  First off, you’ll see these dried pork legs hanging EVERYWHERE (above).  We didn’t actually try any, but have heard it’s pretty much like the best tasting bacon ever. 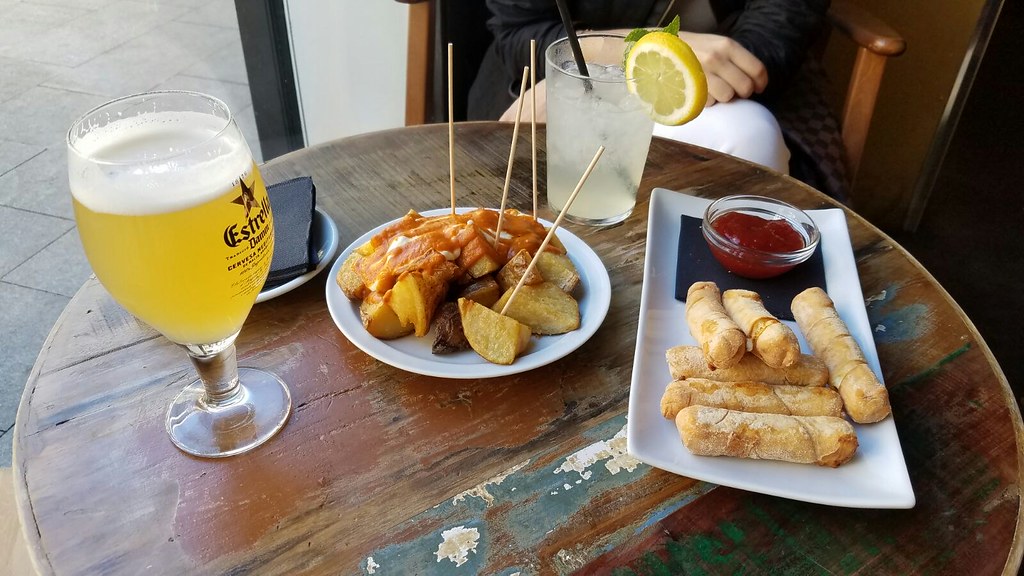 And then, there are tapas… Wonderful, wonderful tapas, which are more than just a meal… They’re an experience.  Taking a taste of each small plate as a family is actually a lot more fun than having to finish an oversized restaurant plate on your own.  Our favorite dish was patatas bravas, which wash down perfectly with a clara (beer with Fanta) or a pitcher of Sangria. 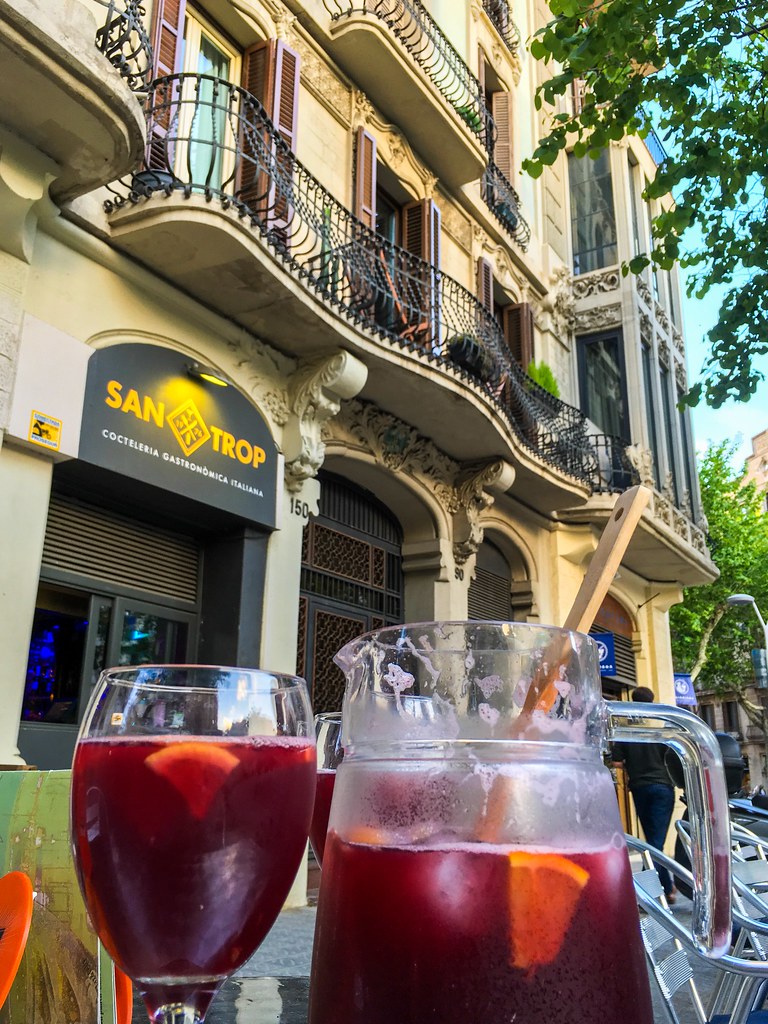 Honestly, everywhere we went in Barcelona had really cool and hip vibes. 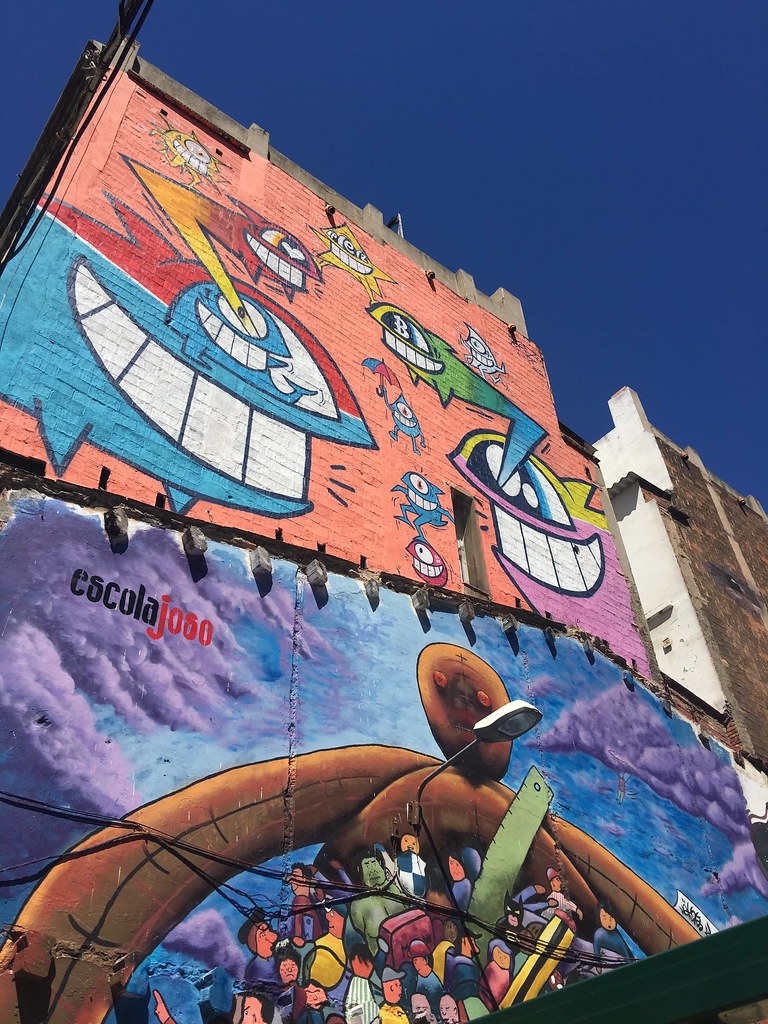 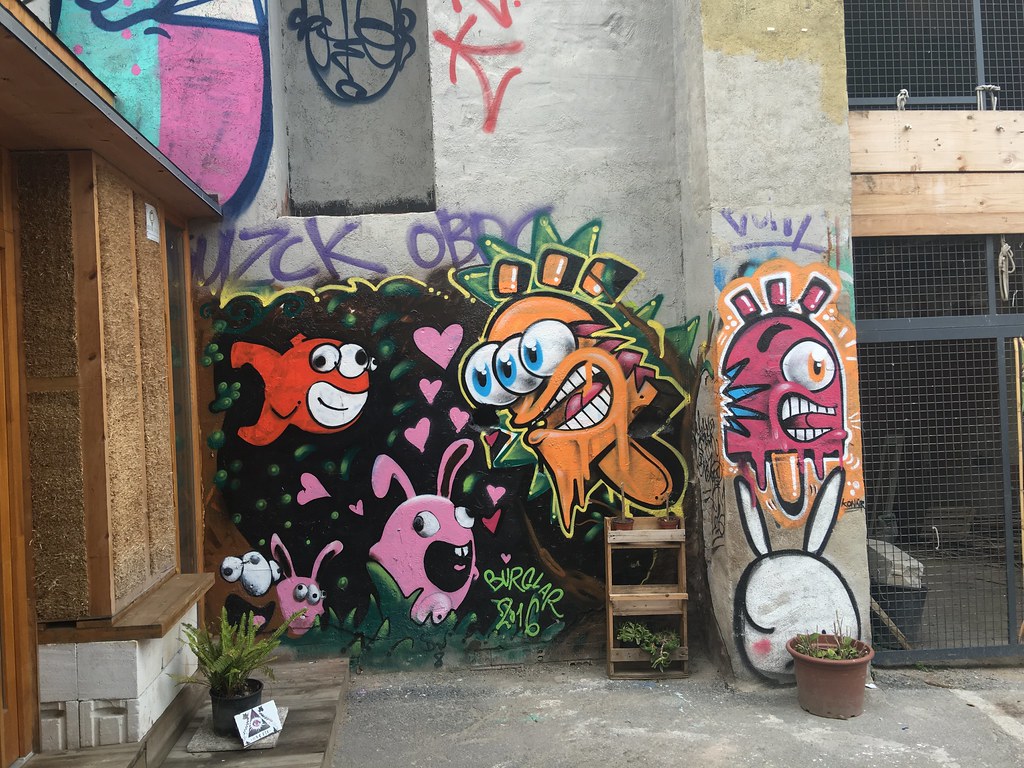 Part of that, thanks to local artists such as Pez, who we’ve also seen murals by in Colombia and Miami. 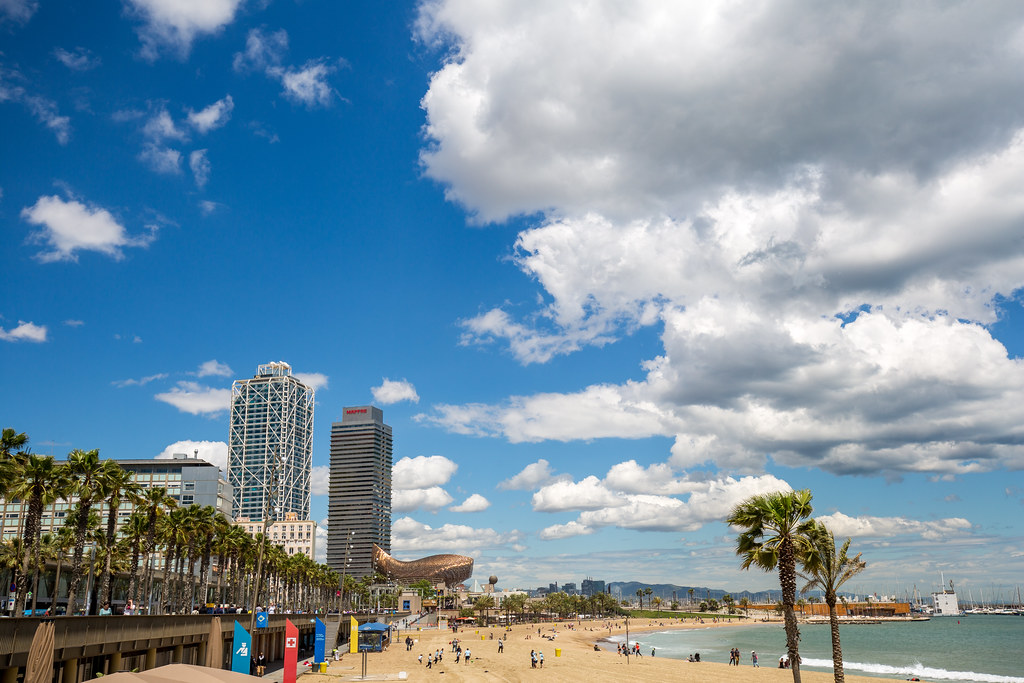 Just like Gaudi’s cathedral, for every old and gothic part of Barcelona is a new and contemporary area, for example the Olympic Marina; home to the city’s hottest nightclubs as well as a nude beach- Warning: nude beach is used by those with all body types and ages.  Let’s just say I saw more of an old, hairy, fat guy than I ever wanted to see of an old, hairy, fat guy… 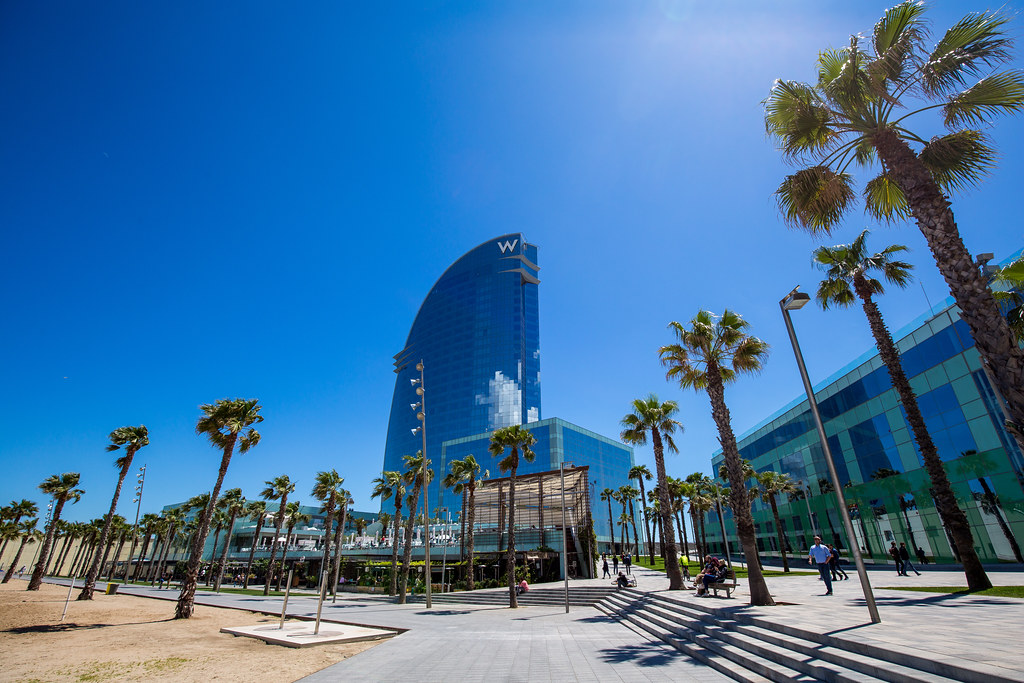 With all of that being said, Barcelona does an amazing job of connecting it’s past with the modern day- in a very chic and artsy way. 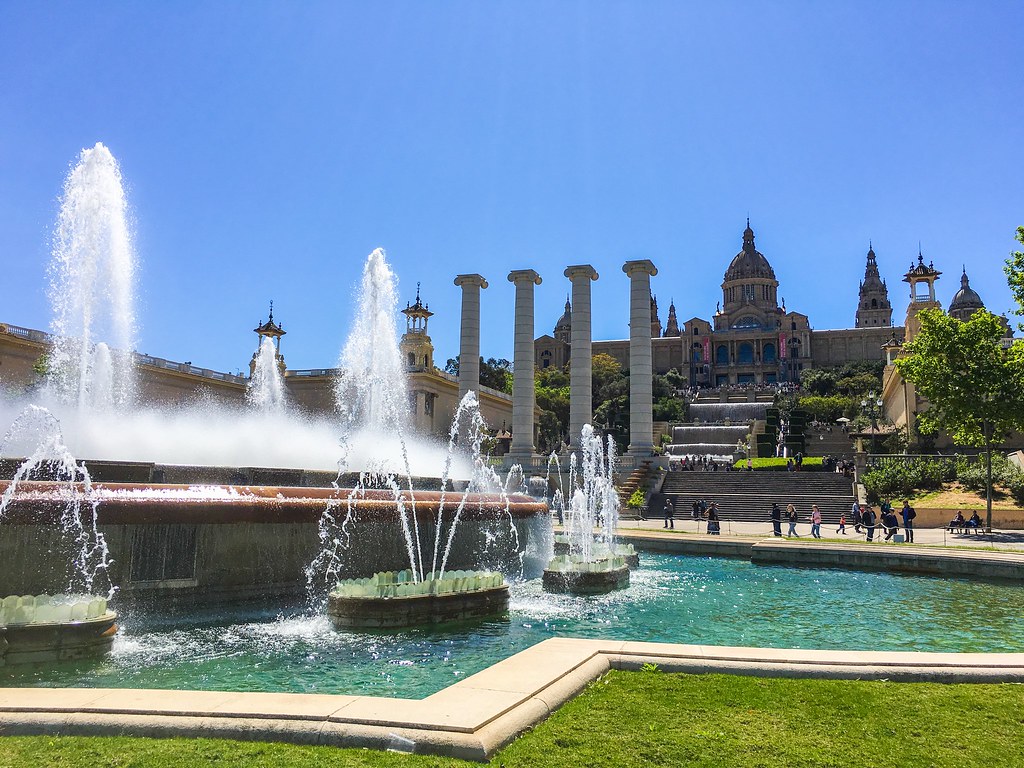 One thought on “Barcelona: Where Old Meets New”