Since I had agreed to stay in Florida longer than expected, Fabian wanted to do something special for my birthday.  Knowing how much I had been wanting to go to Miami, he planned an entire five day trip for us.  It was filled with urban areas, art, and everything I love most.  His brother’s birthday falls a few days after mine, so the whole family ended up meeting us there, it was a blast.

Let’s look at some of the highlights: 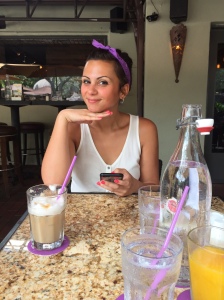 For my Birthday Brunch we started the day at a charming, outdoor cafe called Green Street.  Its located on a corner of Main Highway (Coconut Grove), lined with fans, and filled with locals- always a sign of good food.  Their menu is loaded with French Toasts, Pancakes, Omelettes, and some pretty badass Bloody Mary’s and Mimosas.  I really want to come back to this place to try every meal of the day.

(Kehinde Wiley, Regard the Class Struggle as the Main Link in the Chain, 2007)

More birthday activities consisted of checking out the Perez Art Museum Miami.  The main exhibition at the time was called Poetics of Relation, which held incredible and moving work. The pieces in this show focused on “the historical legacy of trauma caused by colonialism and migration.”  This was by far the best art museum we had visited in Florida, putting others in Orlando to shame.

Once you’ve finished the galleries you have to check out the gift shop and the swings located right outside.  Lounge around in the sun and enjoy the view of the city.

On the way back to the hotel I really wanted to try the Metro Mover, a free, fully-automated mode of public transportation through the downtown Miami area.

I had seen it pass us and it was so adorable… I knew I had to get on one!  It looks like a tram you would take at an airport.  Even just a short ride will give you some interesting views of the city.

Here’s a map of the Metro Mover’s loops:

Another area worth exploring is Key Biscane, mostly for the Marine Stadium; which was once used to view powerboat racing. Now the abandoned space is a breeding ground for local street artists.  I think the following photos will show you exactly what I mean:

Now I must warn readers: if you plan on visiting the stadium, it is technically trespassing and you may be caught by security.  Basically they’ll just ask you to leave, nothing more.

For Fabian’s brother’s birthday we went to a nearby restaurant called the Rusty Pelican (less than a mile from the Stadium).  The Rusty Pelican is a seafood restaurant with large open windows to view the Miami skyline.  The food may be a bit pricey, but its worth being there for the sunset.

P.S. Special thanks to the JW Marriott Marquis Miami for upgrading our room and making my 23rd birthday one that I’ll always remember.

Yes, that is a television screen in the bathroom mirror.